Prior Reading: The Three Paths

The following story can be experienced by starting the quest "Fornost: The Darkness Within" in Esteldin at the North Downs

Frodo woke and found himself lying in bed. At first he thought that he had slept late, after a long unpleasant dream that still hovered on the edge of memory. He lay a little while longer looking at patches of sunlight on the wall, and listening to the sound of a waterfall. ‘Where am I, and what is the time?’ he said aloud to the ceiling. ‘In the house of Elrond, and it is ten o’clock in the morning,’ said a voice. ‘It is the morning of October the twenty fourth, if you want to know.’

‘Gandalf !’ cried Frodo, sitting up. There was the old wizard, sitting in a chair by the open window. ‘Yes,’ he said, ‘I am here. And you are lucky to be here, too, after all the absurd things you have done since you left home.’ He was fully awake now, and the memory of his journey was returning: the disastrous ‘short cut’ through the Old Forest; the ‘accident’ at The Prancing Pony; and his madness in putting on the Ring in the dell under Weathertop. While he was thinking of all these things and trying in vain to bring his memory down to his arriving in Rivendell, there was a long silence, broken only by the soft puffs of Gandalf ’s pipe, as he blew white smoke-rings out of the window.

Word had come to Halbarad from Mincham that powerful wraiths had been seen within Fornost. Halbarad knew of four traitors that aided Angmar in the downfall of Fornost. In the last stand against the Enemy, a great treachery occurred and the gates of the city were thrown down. He told of the legend that the men were bewitched by the Witch-king's champion, a woman named Amarthiel.

Halbarad called in Istuienn, Esteldin’s most renowned scholar, to tell of the history of the fallen city. Istuinen had transcribed ancient text in her youth from Laerdan, a great elven Lore-master that had long studied Fornost and Amarthiel. Golodir, who traveled with Laerdan in the past, lamented that no word of his friend had reached him in many years.

Before its downfall, Amarthiel had entered Fornost under a false guise. She appeared as a great smith, offering her skills against the world of the Enemy. Her words and council were heeded by many. She aided in the crafting of armaments and fears of war. Laerdan believed that before the downfall of the city, Amarthiel wielded a great power to sway the minds of men, Four of the captains of the city guard were enthralled by Amarthiel and taken into her service. When the Witch-king's horde pressed its final assault on Fornost, these men and their followers overthrew the door-wardens and opened the gates.

Istuinen claimed that the four men captive to Amarthiel's will swore an oath to her upon morgul-blades, pledging their unending service and then threw themselves upon the swords. If the wraiths had returned to fulfill their oath, then they would have to be defeated and the blades claimed.

The heroes infiltrated Fornost. The ruined city was guarded by Orcs, Goblins, Trolls, and undead of all kinds.

They valiantly fought through the swarms of evil monsters when they came upon a familiar face; Sara Oakheart.

Surprised to see Sara, once again, deep within evil fortresses, the heroes questioned how she came to be imprisoned in Fornost. Sara, eager to escape, urged the heroes to escape with her. As they reached the entrance to the city, they were beset by Orc War-leaders.

They fought valiantly against the orcs and defeated them. Sara, thankful for her heroes help once again, ran off before she could answer their questions. With Sara freed. The heroes seiged the 4 largest towers in Fornost and defeated the evil wraith within them. Each spoke of Amarthiel, proving their allegiance.

With the four morgul-hilt’s in their possession, the heroes returned to Esteldin. They presented the blades to the Council, who looked upon them with fear and amazement. Istuinen, who carefully examined the hilts, spoke first. She feared that the wraiths were not wholly destroyed, for they were bound to the world by spells upon the hilts. Those present at the council did not possess the craft to unmake the hilts, but Golodir was certain Lord Elrond Half-elven would know how. The heroes agreed to make for Rivendell with the Morgul-blades.

Before setting out, Halbarad asked to speak to the heroes privately. He asked that the heroes deliver the news of what had transpired in the North Downs to his captain, Aragorn, who should already arrived at Rivendell. He told of his captain’s great charge and of his physical appearance but would not elaborate further. As the heroes set out on the road towards Rivendell, they pondered to themselves about the similarities between this Aragorn and the ranger Strider…

Further Reading: A Company of Dwarves

There is only 1 quest that vectors in Nargroth. Under the fires of Orodruin is a zone-wide quest in Talath Urui that takes you to every major area of the zone. The very last objective will be to enter Nargroth so do not start this zone without this objective.
Immediately upon zoning it, a watcher-stone will be in the middle of the room. Click on it to gain various quests available to this dungeon:

The stone will offer just 1 quest:


Head further in and defeat some orcs until an offering drops. Go back to the stone to progress the quest. This will open up 3 auto-bestowed quests:

Here is a map of all the objectives:


When all the quests are completed, go back to the stone and finish the quest "Playing with Fire"
3 more quests will become available:

Here is another map of the objectives for the next phase:


With all quests completed, go back to the stone and turn them in. This will unlock the final quest, "The Ancient Ward":

Here are the locations of the fragments:

TBM's Guide To: The Guardian 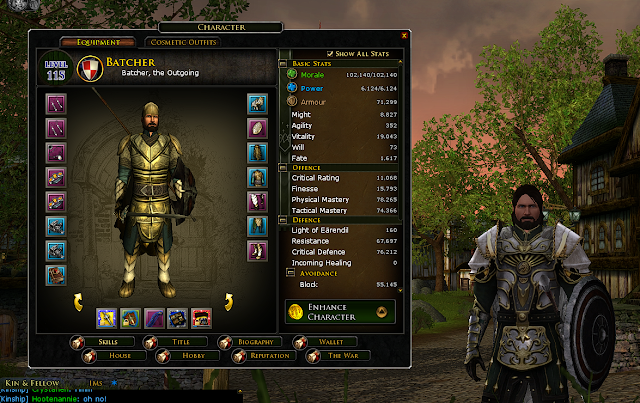 Disclaimer: This guide is my personal opinion on how to optimize and run Guardian's in U21. This by no means is indicative of the best possible methods and I am certain people will have better suggestions than I. Feel free to post in comments and I will review and update accordingly.

This is my Guardian, Batcher:


My Physical and Tactical Mitigation is capped, I have 100k+ health, 77k Crit Defence and 55k, 35k Block and Parry Rating Respectively. Let's talk about how to accomplish that. 1) Class Traits If you are going to be endgame tanking, you want to mix blue and yellow with 5 points into red's skills damage + rating. I am missing 2 trait points, this will go into completing 3/3 Follow Through and then 1 extra point into anything.


If you are soloing or leveling, however, you are going to want to instead focus on combining blue and red to form a really sturdy and durable solo build:


Why do you spec into blue instead of red for soloing?